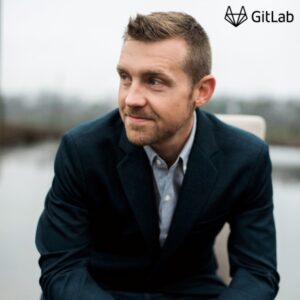 As Head of Remote – GitLab, Darren works at the intersection of culture, process, transparency, collaboration, efficiency, inclusivity, onboarding, hiring, employer branding, and communication overall. He hopes to leave a legacy of change, empowering more people and companies to work remotely in locales that fulfill their soul. As an adoptive dad, he longs for others to be able to work from anywhere and savor moments with family.

Darren grew up near farms and wide open spaces, but never turned down the opportunity to fire up an NES or build just about anything with his dad. He earned a B.S. in Business Management from NC State (while hopelessly becoming a lifelong Wolfpack fan), an MBA from Campbell University and a opportunity from Ryan Block to write for Engadget, where he went on to serve as the site’s Managing Editor over his 7.5 year tenure.

He also co-developed Engadget Expand, a conference that mixes breaking news and interviews with a show floor experience that’s open to the public. Prior to founding Page 52 Consulting and working as Global Editor-in-Chief at techradar, he served as Senior Vice President of Editorial Strategy at Weber Shandwick, working with the MediaCo team to build workflows and strategies that resonate in the world of brand publishing and communications. He’s also contributing columns and insight to Gear Patrol, BGR and The Loop Magazine, and never has been one to turn down interesting adventures.

He holds the Guinness World Record for being the most prolific professional blogger on planet Earth. He also adores travel. He is married to the most gorgeous woman in the world and acts as a dad to a French Bulldog / Boston Terrier mix, named Gangster. As of March 2012, he’s a published author.

He is a published author, penning ‘iPad Secrets’ and ‘iPhone Secrets’ through John Wiley & Sons, Inc. He also wrote ‘Living The Remote Dream,’ a how-to guide for accomplishing amazing things from anywhere on the planet. He has served as an advisor and instructor at CreativeLive, hosting 3-hour courses on blogging and working remotely.

Bring a guest for free. Tickets are refundable.

Get TWO TICKETS TO OUR NEXT EVENT

Bring a guest for free. Tickets are refundable.